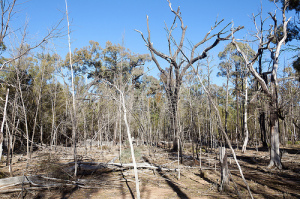 Always stay polite and calm.
The phone will be answered by an office assistant.
Introduce yourself and where you are from.
Tell them you want to pass a message on to the Minister about the Narrabri CSG project.
Ask them to take down your name and address and the points you raise.

Say that you have seen news today that the NSW Planning Assessment Commission has conducted a secret tour with Santos to Queensland gasfields and export terminal.

Tell them you are concerned this is likely to be outside the scope of the Commission’s responsibilities and in breach of its code of conduct.

Advise them that the community can no longer have any faith that the Commission can make a fair, unbiased decision on the Narrabri gas project.

Ask for an urgent commitment from the Minister that:

Let Us Know How It Goes

Leave a comment on this page with feedback on how it went, and what response you received.

Documents obtained by Lock the Gate under freedom of information laws reveal that the independent commission charged with making decisions about major gas projects in NSW conducted a secret trip with Santos to tour it’s CSG gasfield and LNG export terminal.

Lock the Gate alleges that the clandestine tour by the NSW Planning Assessment Commission was outside the scope of its responsibilities and in breach of its code of conduct.

The documents reveal that the Planning Assessment Commission began organising the trip while the Environmental Impact Statement (EIS) for a highly controversial Santos CSG project near Narrabri in North West NSW was still on exhibition for public feedback.

The EIS received a record 23,000 submissions, almost all of which were objections.

The Planning Assessment Commission is expected to be the final decision maker on the Santos Narrabri Gas Project. However, it is only supposed to assess projects after they have been specifically referred to it by the Planning Minister in a formal process.

That process has not yet commenced for the Narrabri Gas Project.

Read more information and review the FOI documents themselves here.