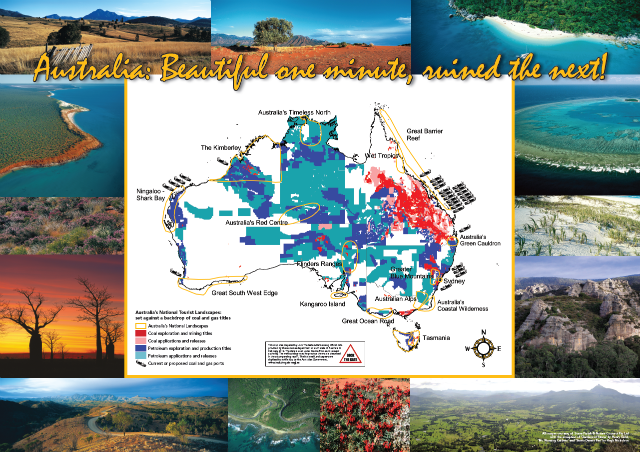 In March 2013 we launched our Call to Country. It's a call from the heart of this country, and the people who love it, to demand real action to restrict inappropriate coal and gas mining.

As of early 2013, our mapping showed that 437 million hectares of our land is covered by coal and gas licences or applications. That's more than half of Australia and an area 18 times the size of Great Britain. Even our greatest international tourist icons are not safe, with at least 11 of our 16 National Landscapes at threat.

Our Call to Country was plastered to the window or pinned to the door of almost every Federal electorate in Australia. But that was just the beginning....

Right up until the last federal election in September 2013, people from around Australia took Our Call To Country and met with their Federal Members of Parliament.Our Federal politicians have shirked their responsibilities for too long - but they have the power to act and now they need to use it.

You don't have to stop with your Federal MP's either! Keep on taking the Call to Country everywhere it needs to go - pin it to the doors of churches, financial institutions, chambers of commerce, and the offices of federal election candidates. Share it with your friends and families, your colleagues and your social and sporting clubs.

In our Call to Country we call on the Australian Government to:

1. Put in place an urgent moratorium on coal seam gas and other unconventional gas mining.

4. Put in place national standards on coal and gas pollution and enforce compliance.

5. Stop using taxpayers' money to provide handouts to big coal and gas corporations and make the miners pay their fair share in taxes.

7. Conduct research into greenhouse gas emissions from mining and make sure they are properly accounted and fully paid for.

8. Hold a Royal Commission to investigate the management of coal and gas resources by all Australian governments.

If you love Australia, now is the time to act. The country is calling.

Take action today: click here to sign the pledge to tell all Australian politicians that you support our Call to Country and that you will work with your neighbours to protect your community and the future of our country from inappropriate mining.

Map featuring impacts on natural areas: Australia: Beautiful one minute, ruined the next

Map featuring impacts on farming land: Australia: Our country is not a quarry!