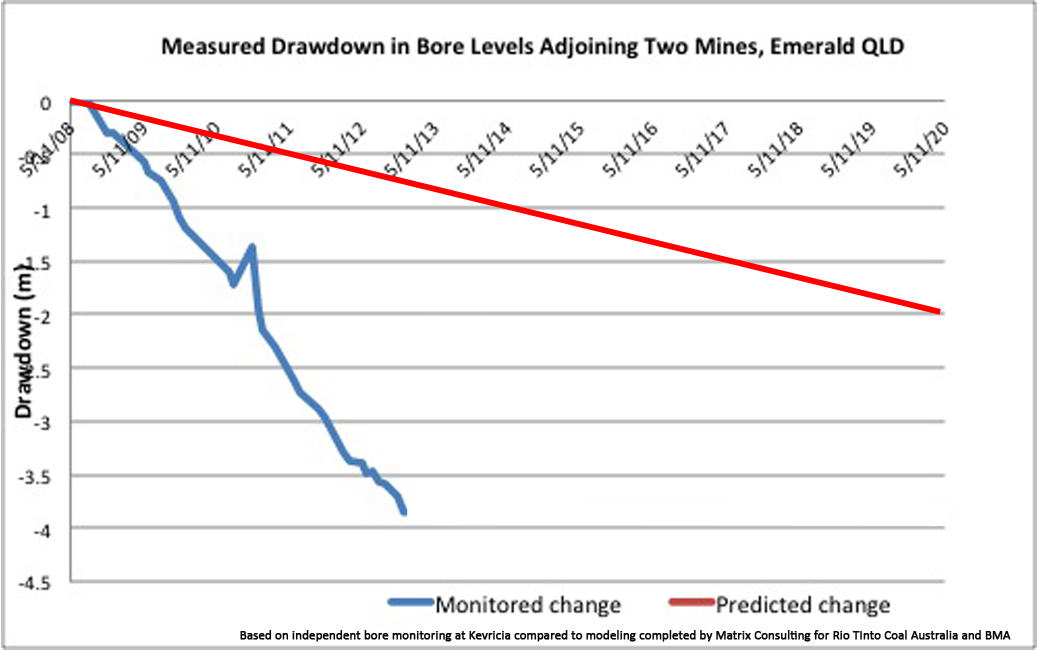 New data collected on a farm adjoining two coal mines in Central Queensland shows that groundwater drawdown from mining in the area is five times worse than was originally predicted by the mining companies Rio Tinto Coal Australia and BHP Billiton Mitsubishi Alliance.

Emerald wheat farmer, Paul Murphy, has for the first time today released independent monitoring data from a purpose built monitoring bore installed on his property to test the impacts of nearby coal mining on his groundwater.

The results raise major concerns about the potentially devastating impacts on water resources of nine proposed new mega-mines in Queensland’s Galilee Basin.  In particular, Lock The Gate Alliance is calling for the Minister to delay a decision on the Kevin's Corner coal mine near Alpha, due this week, to properly assess water impacts as required by the new Federal water trigger.

"It took considerable effort just to get the companies and the government to take my concerns about the water seriously and measure the impacts" said farmer Paul Murphy.

"Measurements show that there has already been a drop of almost 4m in my bore over the last 4.5 years. This is five times greater than was predicted by the mining companies in their modelling. If this trend continues, our water level will drop 10m by 2020, not the 2m predicted by the miners.

"My results should be ringing alarm bells for farmers and communities across Central Qld, given the massive new coal mines proposed.  Water is a farmer’s lifeblood and threats to our water put our livelihoods and food production at risk.

"Governments are failing to protect communities and ensure we have productive country to pass on to future generations.  The miners’ predictions are not worth the paper they’re written on," he said.

"In light of this new information, we're calling on the Federal Environment Minister to undertake proper assessments and planning before making his decision on the huge Kevin's Corner mine, given that he now has to properly consider water impacts under recent changes to Federal environment laws" said Drew Hutton, President of Lock The Gate Alliance.

“Both Queensland and Federal Governments have recommended more studies into the likely water impacts of Galilee Basin coal mines.  Kevin's Corner is the first major test of the new Federal ‘water trigger’ - will these additional water assessments be conducted before an approval is given that will threaten the water security of farmers in the region?

"The monitoring data released today throws an unacceptable level of doubt over the accuracy and credibility of hydrological models used by coal companies. Our water resources are too precious to put at risk from rushed and inadequate assessments" he said.