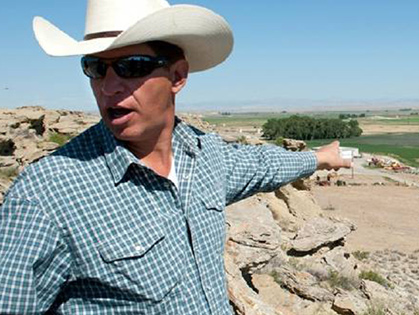 Resource Library for Special Australian 2016 Tour: John Fenton, a cattle rancher from the USA, tell his story of how fracking for gas polluted water and ruined lives in his home town of Pavillion, Wyoming.

Public meetings will be held in Qld, Northern Territory and Western Australia. 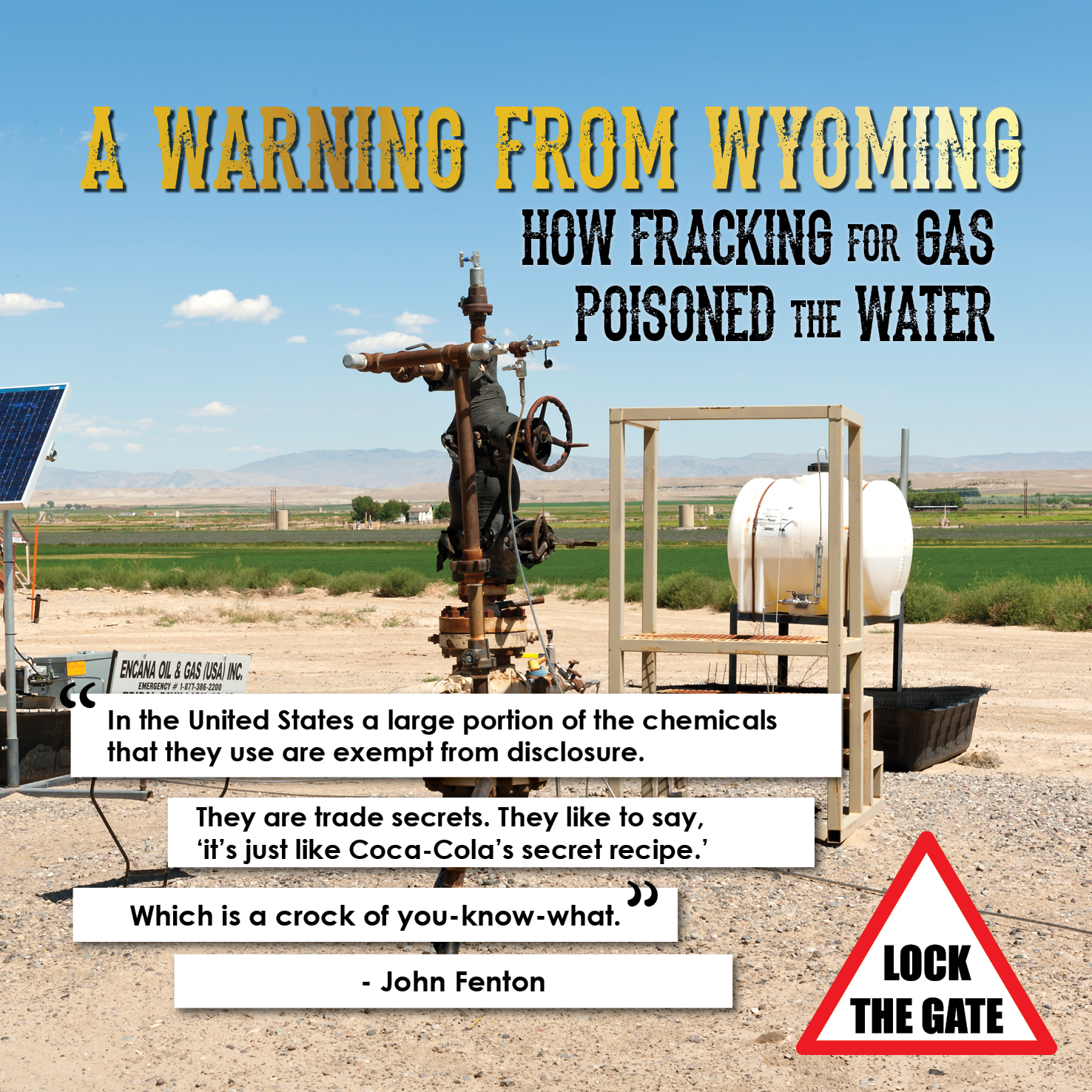 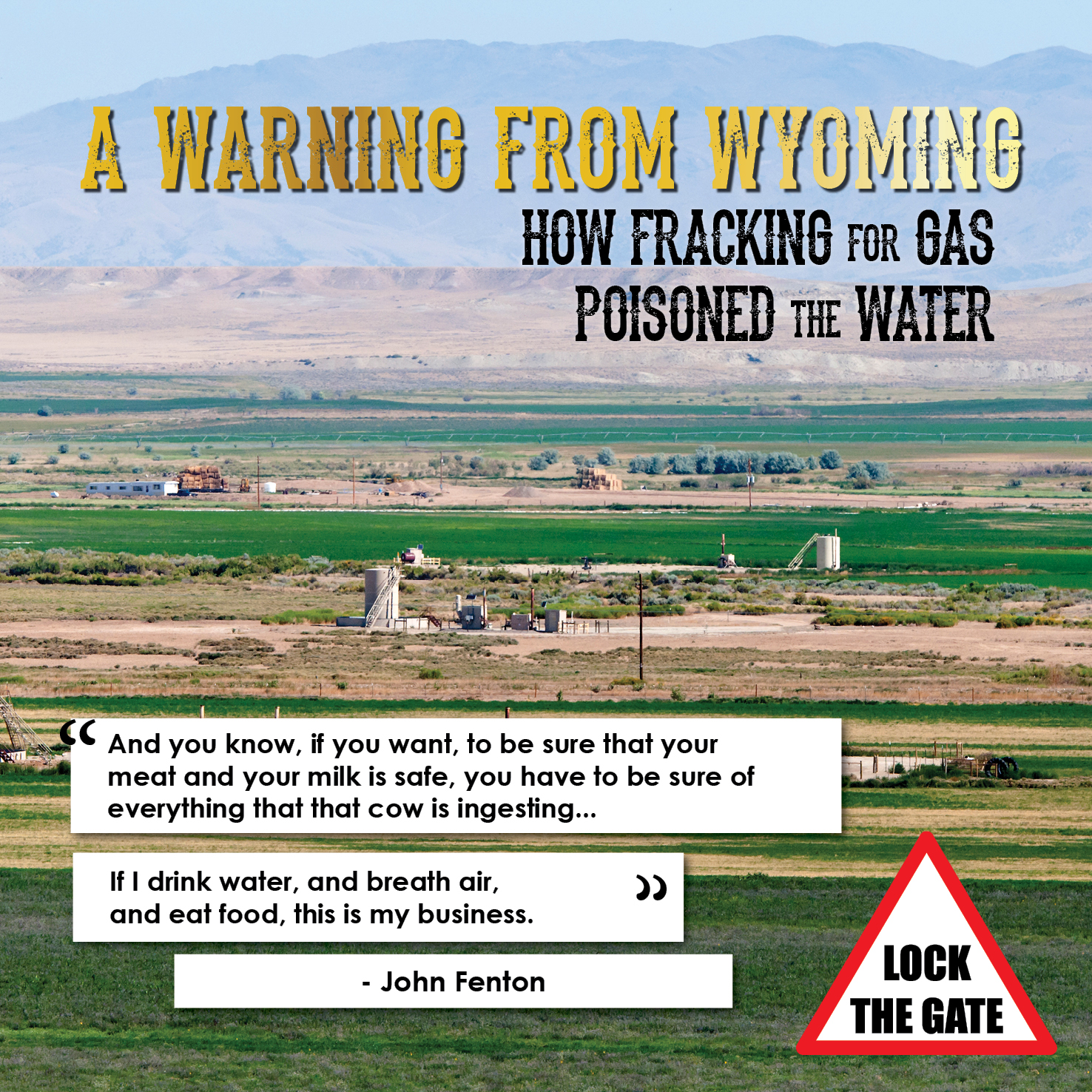 “We had an industry that came to us and said, “We want to be a part of the community. We want to be here and provide jobs. We want to be sure that your sons and your brothers and your fathers have jobs that they can depend on.” And we bought it. We went from living on a farm to living in a refinery.

First of all you lose all your privacy, and the use of your land is drastically altered, because there is people coming and going 24 hours a day.

A lot of traffic. Big pieces of machinery. And people making decisions on your ground, about what’s happening there. With no consultation with you.

When things started to go wrong they weren’t anywhere to be found.

This is what it looked like, this is our house. We were still building it when they started drilling real close to us.

State of Wyoming says, “No oil and gas drilling any closer than 350 feet to a domestic source of water.” Because we have all those great regulations, but the State of Wyoming won’t hire any inspectors to come out and make sure they’re actually following the regulations.

We were the ones that have the most to lose.

This is what the hydro-fracking process looked like from our front porch. The fracking was small scale compared to a lot of the fracking that goes on.

In the United States a large portion of the chemicals that they use are exempt from disclosure.

Which is a crock of you-know-what.

I guess the first health impact I really saw were with my mother-in-law. She lost her sense of smell, and her sense of taste. And at first we thought it was maybe something unique to her, but now my wife is having the same problems.

And a lot of the neighbour ladies are losing their smell and their taste.

And there is women who have neuropathy, where their arms and their legs go numb. And a lot of the men suffer chronic fatigue. And ringing of the ears, and chronic headaches.

And you know anybody who works on a ranch or farm will tell you there is tired, there is working tired, and then there is so tired that you feel like you can’t function. And it’s a completely different thing.

And I think the thing that probably disturbs me the most are children seem to be the most susceptible to this.  Kids with nose bleeds, kids with kidney failure…

We can’t even hardly go outside at times, because the fumes from the production tanks are horrible.

We have BTEX chemicals that evaporate out of the tanks. You can taste it.

My youngest son, who is now 15, he was 3 when they really started doing the heavy heavy drilling right within 350 feet of our home, started having seizures. And has spent the last 12 years of his life on anti-seizure medication. And every time we leave home, every time we’d go somewhere else, he’d feel better.

We’d all feel better when we’d leave home. It’s really disturbing. We’re the ones that find 99% of the problems that occur on our place.

And then, you have to try and find someone who can actually come out and fix the problem.

This is kind of a regular occurrence around us now.

We’ve got this whole infrastructure that’s starting to fail.

But the recommendations from our Centre for Disease Control, were ‘don’t drink the water, don’t cook with the water, and if you bath in it, or wash dishes or wash laundry open the windows of the house and ventilate it. So your home doesn’t explode from the methane that comes out.’

And as you’ve all seen on video clips from the United States, there is water that lights on fire. And that’s the most incredible stupid thing, to see water catch on fire. But it’s happening.

Biggest thing we’ve probably seen in social ills, is there is a massive amount of drug use and alcohol use that follows this. We have some of the highest drinking rates in the United States, and it goes way up when those industries come to town.

Public works cannot keep up with the water, and sewer demands of all the man-camps that come in. And after they’ve run crazy in your town, for 5 or 6 or 10 years, then they leave and go somewhere else, and you’re left with a giant mess and it’s very hard to recover from it.

And you know, if you want, to be sure that your meat and your milk is safe, you have to be sure of everything that that cow is ingesting.

And what concerns me is that, we’re going to actually make somebody sick. And once that happens, I don’t think they’ll be any fixing the beef industry in that part of the country.

And they’ve also bought the political system in the United States. And it seems to me from what I’ve seen here it looks pretty damn similar to what happens on our country.

Politicians are looking at it for money.

And a lot of those politicians when they stop being elected by the people are going to go and work for industry. It’s a giant ‘good-old-boys’ club’, is what we call it in the States. And they stack the deck in their favour, and unless the people stand up and raise hell with them, they’ll just run over the top of you because they’ve got it bought.

The biggest tactic, that this industry uses is to divide the people up, and make them feel like they’re different, and make them have conflict with each other.

I see this happening all over the United States, and now I hear stories of this happening in Australia. And in Europe and in South America and Canada and Mexico and where is it going to end?

It’s only going to end when the people stand up and absolutely demand that things are done differently.

And it’s not about, energy independence, it’s about human rights. If I drink water, and breath air, and eat food, this is my business.

All parts of Australia need to stand together on this, it doesn’t matter if it’s coal seam gas, or shale gas, or tight sands, it’s all the same, and it has the same end results.

The people can stop this, if they stick together.

Despite what you might heard from the gas industry and politicians, the USA presents a frightening window to your future if we do not act.

This is everybody’s business.” - John Fenton

Huge thanks to John Fenton and family and Jeremy Buckingham MLC, NSW Greens.