Landowners Sit-In at Federal Parliament: Call for 'A Fair Go' Against Mining Giants 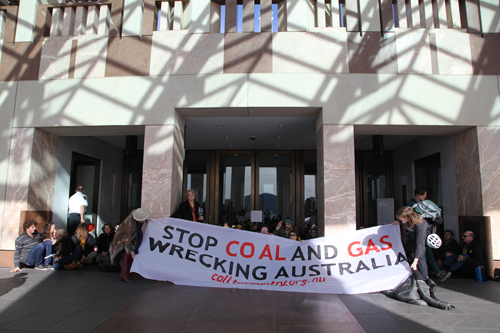 "The current expansion of coal and gas mining across the country is one of the gravest threats Australia has ever faced as a nation" said Drew Hutton, President of Lock The Gate Alliance.

"While new laws passed yesterday to assess water resources are welcome, we are disappointed that both major parties voted against giving farmers the right to say 'no' to mining, leaving them to fend for themselves when the mining giants come knocking.

"We've come here today to ask the Federal Coalition to give landowners a 'fair go' - by supporting a legal right to say 'no' to coal and gas mining and acting to strengthen Federal laws around mining rather than weakening them as they have foreshadowed" he said.

"I'm a tourism operator from the beautiful Scenic Rim region of Queensland, but I don't have the legal right to protect my property or my business from coal and gas mining" said Innes Larkin.

"This is fundamentally unjust and it's time for our Federal politicians to protect their citizens and to make new laws that will put our most significant land and water resources off limits" he said.

" As a farmer from north-western NSW I've seen that the balance of power to negotiate is disproportionate between farmers and multi-national mining companies.  The only way to restore that balance is to give farmers the right to say no", said Phil Laird

"Surveys of communities across north-west NSW have found that 96% of landholders reject coal seam gas mining.

"We're calling for all political parties to strengthen Federal laws to control mining and to put in place strong measures to protect farmland and communities.  We're seeking the support of the Liberal National Party to defend our country" he said.

Can you chip in $50 today, to help protect the country we all love?

The Palaszczuk Government has given one of the biggest signals yet that it plans to backflip on multiple election promises to protect the Lake Eyre Basin from new oil and gas after it granted a prospecting licence across 1000 square kilometres north west of...

Farmers are calling for greater transparency from the coal seam gas industry after an Arrow Energy owned pipeline exploded near Lake Broadwater on the Western Downs, setting fire to a donga earlier this week.