Lock the Gate has urged the Australian Labor Party to make a firm promise to create a Federal corruption agency in the mould of the NSW Independent Commission Against Corruption following comments by Opposition Leader, Bill Shorten indicating the ALP will reopen a senate committee investigating a national integrity commission. 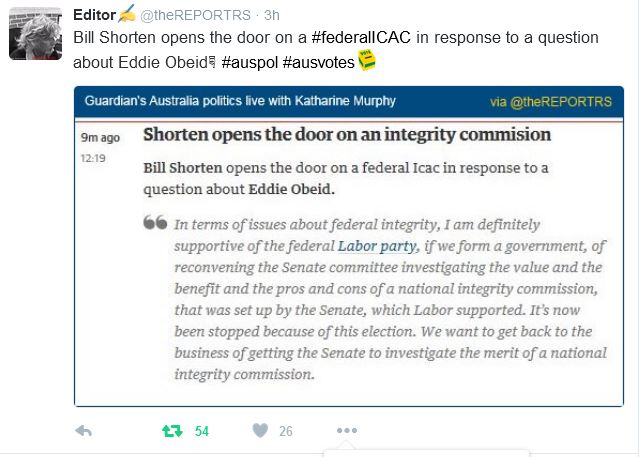 “There have been so many integrity scandals involving Federal politicians in recent years and still no national body charged with upholding the public trust. A firm commitment from the Australian Labor Party to create an anti-corruption commission would signal their commitment to the principles of faith, honesty and service that are too often lacking in contemporary Australian politics" said National Coordinator, Phil Laird

“We know from bitter experience that wealthy mining companies have access to Government that the general public is never granted - attending weddings and football games together, rubbing shoulders and sharing agendas. The public interest suffers when there is no watchdog to ensure high standards of integrity are upheld by those that serve the public trust.”

“When parties ask us to ‘trust them” it is incumbent on them to give a real assurance not just their word. Concerns of corruption are well-placed and widespread, with polling from The Australia Institute in March this year finding that 65.2% of respondents supported a national ICAC and the issue has remained the elephant in the room in 2016 #ausvotes.