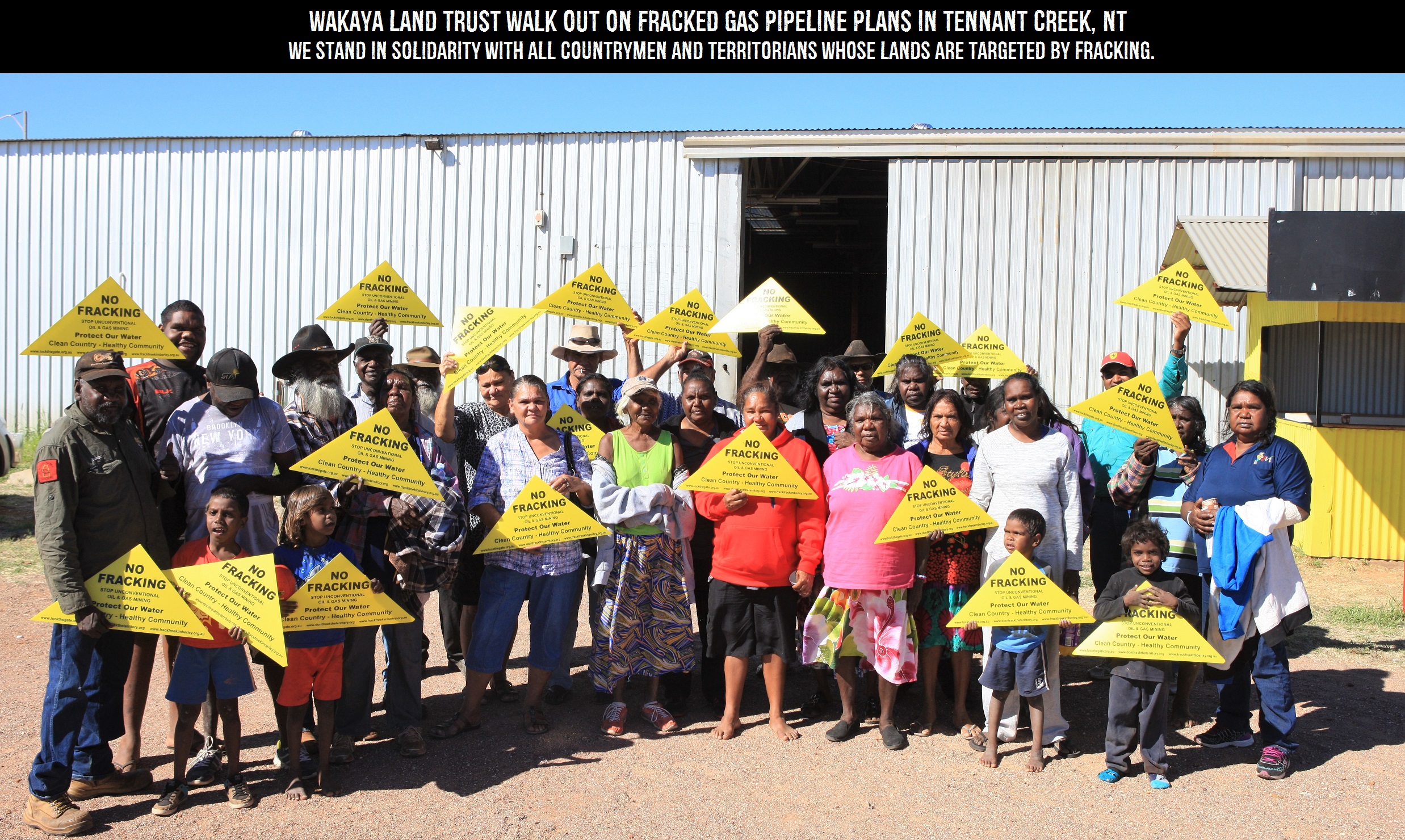 Northern Territory Traditional Owners whose land is being targeted for the proposed new gas pipeline between Tennant Creek and Mt Isa have yesterday afternoon walked out of a joint Central and Northern Land Council meeting, pushing against a planned access route deal for Jemena’s Northern Gas Pipeline, due to concerns about the impacts of fracking gasfields.

A Land Council notice for the meeting asked, 'are you ready to say yes or no to the pipeline?' (see here). But the concerns and objections raised by Traditional Owners about the rushed consultation process and the proposed pipeline’s reliance on fracked gas has now meant the decision meeting is postponed until late September.

A presentation by pipeline hopeful Jemena, jointly owned by the Singapore and Chinese government, claimed no fracked gas would be needed to underpin the pipeline’s economic viability. This was challenged by Traditional Owners and prompted a walk out by members of the Wakaya Land Trust. They pointed to existing media statements in which Jemena and the NT Government had acknowledged the pipeline would ‘drive the development of onshore gas in the Territory’.[1]

Betty Rankine, senior Traditional Owner of the Wakaya people from Soudan Station explained the group’s objections, “The company is not telling us the proper story about this pipeline. We know it will mean fracking for gas to fill it, which will damage our country and we’re not happy about it.

“We want our country to be clean and healthy for our children and cattle. This gas is only going to go overseas, Aboriginal people will not benefit but our lands will be damaged beyond repair,” she said.

A final investment decision on the pipeline is due in December 2016 but Wakaya Traditional Owners say they will not back down and allow the project to proceed on their land.

“The Wakaya people are bailing up on this pipeline because what we heard today at the meeting wasn’t the full story. We know if the pipeline goes ahead then all this fracking will come afterwards and will damage our bush tucker, water and the land for our kids,” said Josie Davey, a Traditional Owner who attended the meeting in Tennant Creek.

Max Priest, another Wakaya Traditional Owner explains, “If we say yes to the pipeline we would be helping the fracking industry to expand across the whole Territory and damage not just our own but other mob’s country. We are standing up and saying no to this pipeline not just for our own sake but on behalf of a lot of station owners and Native Title mob who don’t have any rights to stop the gas companies walking on and damaging their land.”

“We have not made any deal today, we are going to block this pipeline and we will continue to push for a full ban on fracking to protect every community in the Territory.”

The walk out and objections raised by some Traditional Owner groups could significantly delay the planned construction timeframe, in which Jemena had hoped to have works underway by early 2017.
The Wakaya Land Trust have now removed the Land Council as legal representative in negotiations surrounding the pipeline, and raised concerns with the consultation process, including:
Information from an environmental report was provided at the meeting but the full Environmental Impact Statement for the Northern Gas Pipeline will not be submitted to the NT EPA for public comment until September, according to Jemena.
Do you like this post?
Tweet