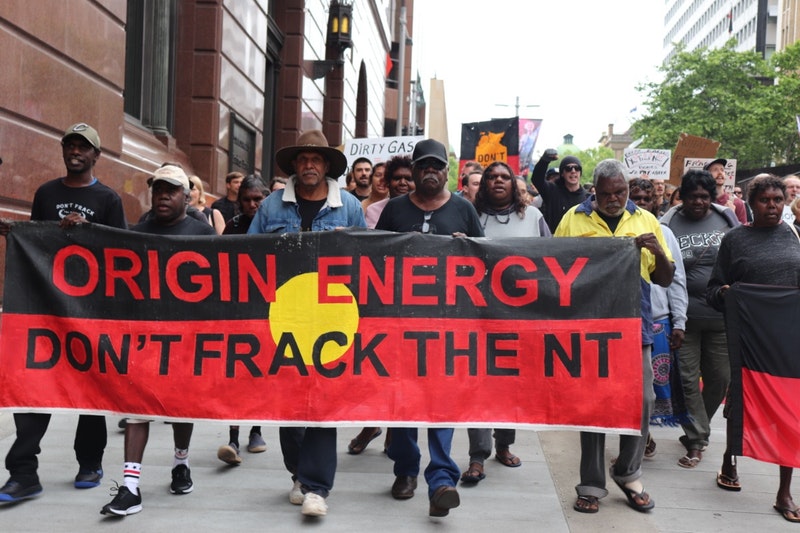 Origin Energy and other fracking companies are lining up to frack the NT, but together, we won’t let them.

People should have the final say about what happens to their land, but Origin Energy has ignored the concerns of Traditional Owners and failed to tell communities about the risks involved with fracking.

Fracking the NT would be a disaster for the landscape, communities and waterways. Plus it would unleash massive emissions of methane, a greenhouse gas, and fuel global warming.

We need to build a powerful movement of people willing to spread the word and take on Origin at every level, from their head offices to their board rooms. Will you sign the Pledge to Stop Origin Fracking the NT?

Is your local council an Origin customer?

Twenty local councils in the Sydney region are part of a group Power Purchase Agreement with Origin Energy. Origin Energy pride themselves on their “good energy” brand and claim to take climate change seriously, however, fracking the NT would be one of the largest potential sources of carbon pollution in the world.

We're asking local councils to call on Origin Energy to cease all plans to conduct fracking in the Northern Territory and elsewhere due to its impact on the climate, communities, environment and water.

We want to stand with the Traditional Owners who are trying to protect Country from Origin's fracking plans in the NT. Origin Energy needs to drop fracking and commit to further investment in environmentally and socially sustainable renewable energy projects.

Australia Under Threat from Coal and Gas

National mapping reveals that 37.3% of Australia is covered by coal and gas licences and applications. That amounts to 285 million hectares - an area almost 13 times the size of Great Britain! Our best food-producing lands, our finest natural areas and some of...