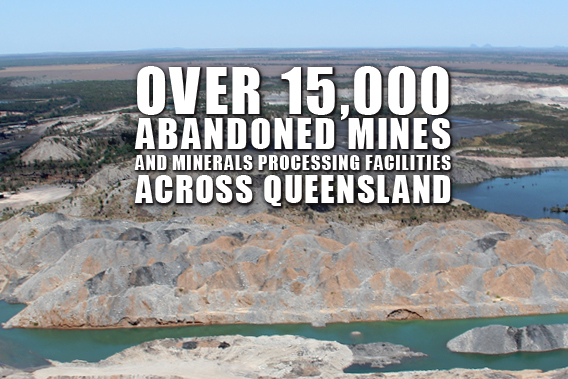 The Queensland Government has had enough of mining and minerals processing companies leaving a mess in the Sunshine State.

It is introducing "Chain of Responsibility" amendments into the Environment Protection Act 1994 to ensure that "responsible persons" cannot walk away from their clean up responsibilities by going bankrupt.

To make a submission:

Write a short submission (it is best if written in your own words) addressed to the Agriculture and Environment Committee via email to aec@parliament.qld.gov.au - you can find more details here on their website.

When making a submission you could make the following points;

Lock the Gate Alliance welcomes this new piece of legislation introduced by the Palaszczuk Government - the Environmental Protection (Chain of Responsibility) Amendment Bill 2016. We believe it will help ensure mining and mineral processing industries prevent their operations from polluting the environment and will make it more likely that they will ‘clean-up’ after themselves.

As we have seen recently in Queensland businesses – Clive Palmer’s Queensland Nickel Refinery adjacent to the Great Barrier Reef and the Texas Silver Mine on the Granite Belt - have declared bankruptcy without completing site cleanup and without leaving adequate funds to complete rehabilitation.

Historically many sites were simply abandoned without any financial provision being made for their rehabilitation, resulting in the cost of rehabilitation being passed onto the taxpayer. To date there are 15,000 mines and other abandoned industrial sites in Queensland with a total cleanup bill in the billions. This will have to be funded by the tax payer.

The legislative changes being proposed will mean that environmental responsibilities cannot be avoided even when companies are in financial difficulty.  The Bill proposes amendments to ensure a parent company or company director can be held responsible for taking action to prevent or clean-up environmental harm, or to enable relevant costs to recovered from them.

However, these extra powers should be accompanied by extra resources for the regulator, the Department of Environment and Heritage Protection. There is little use in beefing up the powers of the regulator without giving the regulators the resources to do their job properly.

Before being passed into law, these amendments will be debated by a Parliamentary Committee. The mining industry has already declared their opposition to these changes. Having enjoyed a loop hole in the current laws that allow them to effectively walk away from their mining rehabilitation responsibilities and pass the cost onto the tax payers, the mining and mineral processing industries have vowed to fight the changes.