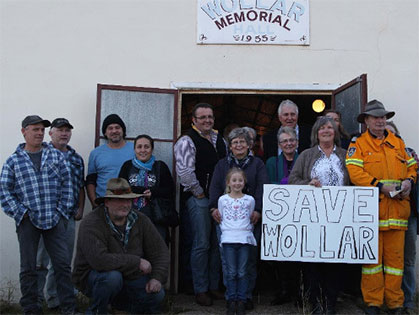 The close-knit community of Wollar in the upper Hunter Valley has already endured a decade of suffering from the nearby Wilpinjong coal mine. Now the mine owners want to expand the project to within 1.5km of the village, spelling the end for Wollar.

Even the NSW Government admits that approving the Wilpinjong mine expansion would kill off Wollar for ever. Sadly, it seems they don't care, with the NSW Planning Department recommending the mine be approved.

Please stand with the people of Wollar as they fight to save their community from coal mining.

The NSW Planning Assessment Commission will decide whether the Wilpinjong coal mine expansion is approved. The PAC is taking public submissions, and will hold a public meeting in Mudgee on Tuesday 11th April.

Here's how you can stand with Wollar:

To make a submission:

Wilpinjong Coal Mine in the south western edge of the Hunter catchment is owned and operated by Peabody Energy US. It has been operating since 2006 and has had severe impacts on the local community of Wollar and surrounds. The 28 square km open cut coal mine lies between Goulburn River National Park and Munghorn Gap Nature Reserve.

The mine has current approval to produce 12.5 million tonnes per annum of saleable coal until 2027. This extension proposes to destroy a further 800 ha of land and extend the mine’s life until 2033.

The original justification for the mine was to supply low quality coal to Bayswater Power Station. Six subsequent modifications have resulted in increased export capacity while increasing the cumulative impacts on the environment and community.

This extension will bring the mine to within 1.5km of the village of Wollar. The company's own Social Impact Assessment identifies that this will accelerate the decline of the community, which was doing great until the mine moved in ten years ago.

Extending the Wilpinjong mine would be the nail in the coffin for Wollar.

1. Social impacts
The social impacts of the project on the community of Wollar far exceed any other social benefits the mine may bring. These impacts have not been properly assessed by the proponent, the Department, nor the previous PAC, and they must be properly assessed before any determination is made. The proposed Social Impact Management Plan does not mitigate current impacts from the mine, notwithstanding future impacts if the expansion is approved. At the very least, if the project were approved, all remaining residents of the Wollar district must be offered acquisition rights.

2. Further planning needed
The Review of this project by the previous Planning Assessment Commission identified “the need for a long term strategic plan” for the coal mines around Mudgee, and for NSW generally. This is urgent need, as the current assessment approach fails to properly account for the cumulative regional impacts of multiple mining operations. The current PAC should delay its determination of the Wilpinjong Extension Project until the “long term strategic plan” recommended by the previous PAC has been completed.

3. Aboriginal heritage
The costs to Aboriginal cultural heritage of this mining project far outweigh any perceived benefits it would bring.  The Rocky Hill complex contains an ochre quarry, rock art sites, and significant artefacts, but will be entirely destroyed by the proposed Wilpinjong mine expansion. The PAC Review recommended that further consultations with Aboriginal stakeholders should be conducted, and this (at the very least) needs to be undertaken before the project is determined.

4. Biodiversity impacts
The proposed biodiversity offsets don't meet current NSW policy, which requires that when critically endangered habitat is destroyed, it's offset must be “like for like”. That is, the same area of the same remnant ecosystem must be protected somewhere else. The proponent has not attempted to do this. So-called “supplementary measures” (such as paying into a fund)  must only be a last resort, according to the policy.

More than half the offset credits for the Wilpinjong Extension will be on land that has been mined and rehabilitated. This makes a mockery of biodiversity offsets, which were already of dubious value in protecting biodiversity and preventing loss of species. Using previously mined land for biodiversity offsets must not be allowed.

5. Final voids
I support the recommendation of the Department that there should be no final void left in the proposed new pit. Additionally, should the project be approval be granted, it should require the proponent to backfill the voids in the currently approved pits, in line with community expectations and world's best practise mining rehabilitation.

7. Climate change
Climate Change impacts from the production of 13 million tonnes per year until 2033 are too great and have not been adequately considered. The world is now beginning to transition away from coal in order to meet pollution reductions needed to ameliorate climate change. There is no need for this coal mine to be given a six year life extension.

For more detail on these key points please see this longer submission guide.