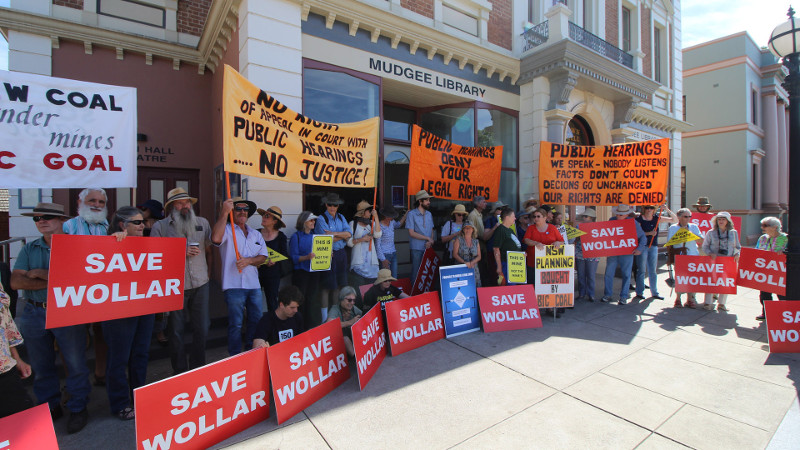 Wollar residents are fighting to save their village from a major expansion of Peabody's Wilpinjong coal mine. If the mine is approved, it will mean extinction for their community.

Rally: 10am, Tuesday 11th April, outside Mudgee Town Hall (64 Market St)
Public meeting: 10:30am, inside the hall. The public meeting will be put on by the NSW Planning Assessment Commission. To register to speak call (02) 9383 2115 before 1pm 6th April. The PAC is the government authority that will soon make the final decision on whether the mine expansion goes ahead, and this is our last chance to influence them. This is Wollar's last stand!

If you're coming from out of town, why not come up the day before our protest rally and join us for a walking tour, social barbecue, and camp out at Wollar Hall.

Ten years ago the NSW Government approved the Wilpinjong open cut coal mine just a few kilometres from Wollar. Local residents were told the mine would be the best thing that ever happened to their town. It wasn't. The noise and pollution from the mine has since driven away 90% of the population of this once bustling rural community.

Wollar's remaining residents are determined to revive their community, but now Peabody Energy has applied for a major expansion of the mine, which would bring it right up to the edge of the village.

Even the NSW Planning Department admits that approving the mine expansion will kill off Wollar for good.  The problem is: they don't care. They want to approve it anyway.

Despite all this, NSW government policy will allow this project to be approved. There is no balance in the assessment of coal mines in NSW, the whole system is rigged to ensure that mining companies get the approvals they desire.

Please join Wollar residents in their fight to save their community, and let's tell the NSW Government it's time to fix up this broken system and put communities before coal!