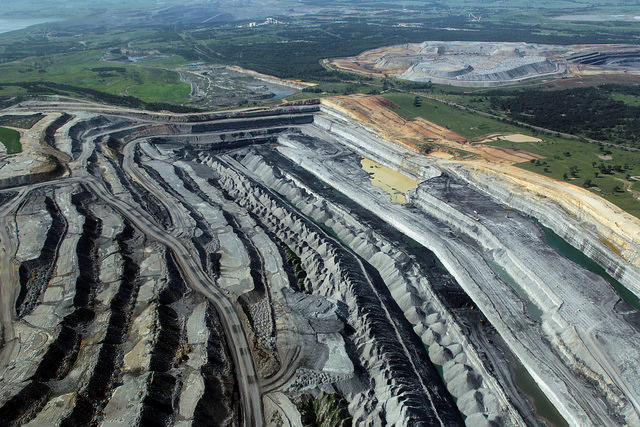 A 2014 report commissioned by Lock the Gate Alliance has revealed the scale of water consumption by coal mines in the Hunter region and the extensive damage being done to both surface and groundwater in the region by expanded open cut coal mining.

The report 'Unfair Shares' highlights the vast quantities of water that are now owned by coal mines which are also pushing agricultural industries out of rich farmland. 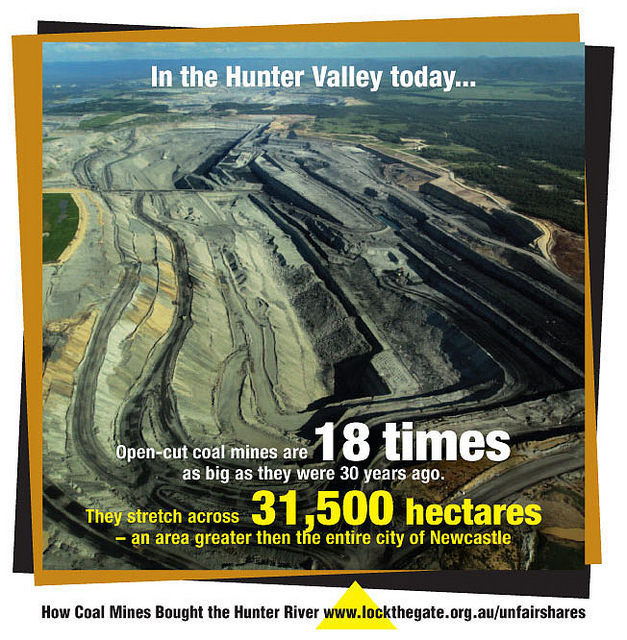 Unprecedented scale of the industry

The scale of mining has escalated dramatically over the last 30 years. The area of the Hunter cut open by coal mines has increased 18 fold since 1981, from 1,742 hectares to 31,500 hectares.

There are currently 42 open cuts pits and 15 underground works operating in the Hunter with an approved annual maximum production capacity of about 213Mtpa of saleable coal.

Water use and ownership

In total, the coal mines own entitlements to 143 billion litres of water,  and last year they consumed almost 88.5 billion litres from various Hunter Valley sources. Agricultural industries have not only been pushed out of rich farmland but are grappling with worsening salinity caused by mining and are struggling to compete for the water they rely on for their livelihoods.

Coal companies are entitled to extract up to 60.5 billion litres of water from the unregulated and regulated syste

ms, and an additional 81 billion litres of groundwater under Part 5 Water Act 1912 licences.

Coal companies dominate ownership of 'high security' water, including 55% of all 'high security' shares of the Hunter River, which means they will obtain water preferentially during times of drought. 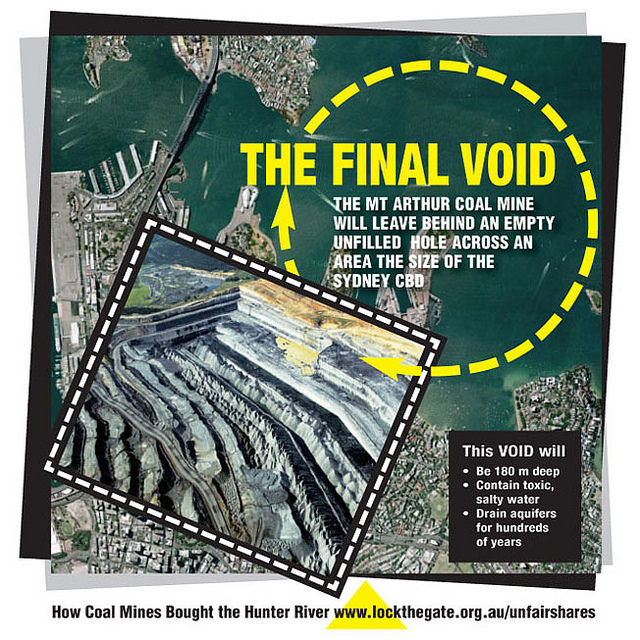 Mining company ownership of water is concentrated in the zones of the Hunter River where the mines dominate the landscape, with coal companies owning as much as 95% of high security water access licences in Glennies Creek below Glennies Creek Dam.

Coal mining companies hold significant quantities of alluvial groundwater water, too, including 33 percent in the Bylong Valley, 18 percent in the Lower Wollombi Valley and 14 percent of the Hunter Regulated Alluvium.

Miners have effectively driven up the price of water in the Valley, making it the most expensive water in NSW with Water Access Licences consistently traded at over $2,000 per megalitre.

Hunter mine open cut pits and final voids are already reducing base flow of the Hunter River. The mines cut open the coal beds, which are saline Permian aquifers. Studies have found many of these are connected to the freshwater alluvial aquifer and the Hunter River and its tributaries. 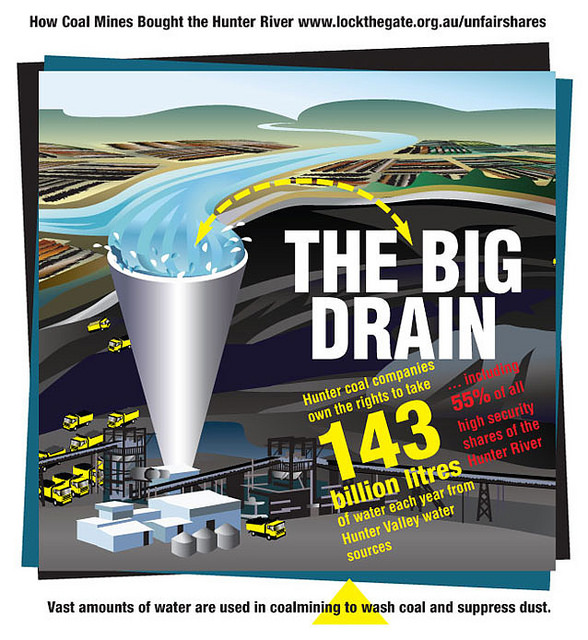 Following the closure of an open cut mine, mining companies are frequently leaving a 'void' as the final landform, because they object to paying the cost of refilling them.

These voids extend across vast areas - the Mt Arthur void will be 4,000m long, 680m wide and 180m deep - and we estimate there are currently around 22 voids in the Hunter Valley.

Water is drawn into the voids from surrounding groundwater, including in some cases the alluvial aquifer, which is used by irrigators and other water users. The salt load of the void water increases and continues to act as an evaporative sink for hundreds of years.

The mines have licences to discharge large volumes of untreated saline 'wastewater' into the Hunter River and its tributaries. Despite some attempts to manage this via the Hunter River Salinity Trading Scheme, the background salinity of the River is actually rising due in part, it seems, to the limitations of the scheme to control the overall salt load from the mines.

Mine water ownership in the face of water shortages

In the last drought, Hunter water allocations under general security licences were dramatically reduced in the period from July 2006 to July 2008, dropping to zero in July 2007.

Farmers reliant on general security water were heavily affected, but coal miners holding 'high security' water licences were in a far better position and able to maintain access to water.

However, mines that are highly dependent on surface water and do not own many high security water entitlements, such as Bengalla and Mangoola, are likely to face shortages in the event of another major drought and may have to reduce production. 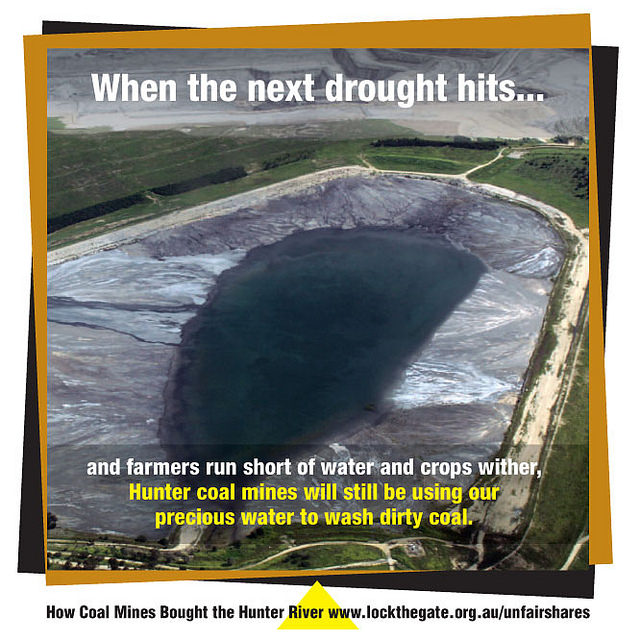 However, both of these mines are currently expanding, and the Office of Water has recently warned that a proposed new mine, the Bylong Mine, may be in a similar predicament.  There is currently no requirement for a mine to prove that it can meet its water needs prior to approval

Four approved new mines, 13 proposed mine extensions and four proposed new mines would take approved coal production capacity of mining in the Hunter to about 260Mtpa of coal.

Should this occur, it is an estimated in this report that the annual water use of all the Hunter coal mines combined would reach as much as 133,120MLpa of water.

Currently, NSW policy settings are inadequate for controlling and mitigating the impact of this scale of mining, its interference with groundwater, intensification of salinity, and dominance of the water market.

The recommendations of this report are sorely needed to restore balance and ensure that the increasing dominance of the coal industry does not push agriculture and horticulture beyond the brink and out of the Hunter altogether.

You can download or view a full copy of the report here.