Woman sacked for having a Coal Dust Free Brisbane sign in her car – what next in Queensland?

Things are seriously wrong in a state that allows a hard-working woman to be sacked for having a Coal Dust Free Brisbane sign in her car. But that’s happened to Wynnum West resident, Kym Garrick who was sacked from her security officer job at the Port of Brisbane.

She lives on the train line along which 150,000 uncovered coal train wagons pass every year travelling through Brisbane suburbs to the port near Wynnum.

“I had the sign in the car because of all the problems we have with coal dust and coal train noise living so close to the line,” she said. “My washing gets coal dust all over it, I and my animals must be breathing in the dust and I had to install water tanks because I need so much water to wash down my yard and vegetable garden.” 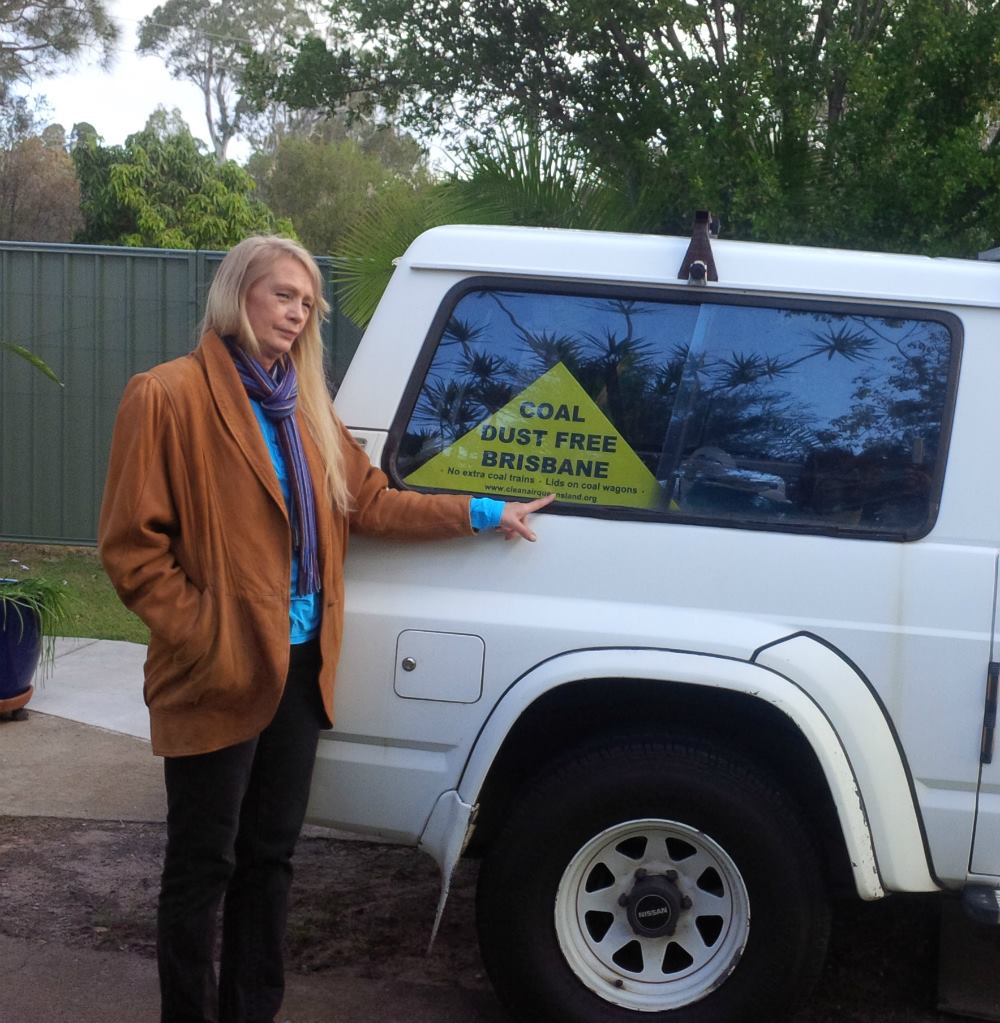 Her termination letter, issued on August 6 on Corporate Protection Australia Group letterhead, stated that her employment contract with the Port of Brisbane “has been terminated, effective immediately” because she refused to remove the sign from her car.

Apparently the Port of Brisbane is claiming the sign made Ms Garrick ‘a security risk’.

Ms Garrick’s letter said: ‘….. the Port of Brisbane requested that you remove a sign that was displayed in your car, relating to protesting against coal. We acknowledge that you did remove the sign, but recently returned to site with this sign displayed again. The Port of Brisbane have advised us that you are unfortunately now banned from their sites.’

She had been working at various ports since May 2013 as an Asset Protection Officer and had recently been asked by her CPA supervisor if she would work as a trainer.

“I was really upset when I got the letter because I know I’m a good worker and I’m not a trouble-maker,” she said. “They just decided they didn’t like me having that sign in my car which is my democratic right and decided to get rid of me.”

CAQ’s spokesman, Michael Kane said he was “appalled” at the sacking. “The health and well-being of thousands of Queenslanders living along train lines are being impacted by coal dust and the problem is only going to get worse as the State Government rushes through every new coal mine approval it can,” he said.

POB is managed and developed by the Port of Brisbane Pty Ltd (PBPL), under a 99-year lease from the Queensland Government. PBPL is owned by the Q Port Holdings (QPH) consortium, comprising four of the world’s largest and most experienced infrastructure investors. The members are: Caisse de dépôt et placement du Québec; IFM Investors; QIC Global Infrastructure on behalf of its managed funds; and Tawreed Investments Ltd, a wholly-owned subsidiary of the Abu Dhabi Investment Authority.QIC Global Infrastructure (one of the owners of Port of Brisbane Pty Ltd) is a business division of QIC Limited. QIC Limited is a Queensland Government-owned corporation and the shareholding ministers are the Premier and the Treasurer, Tim Nicholls.