The threat a decline in the global coal market poses to the Hunter region’s economy has been illustrated through the Australian Rail Track Corporation (ARTC)’s latest capacity strategy, released on Friday, placing more pressure on politicians to begin investing in economic transition.

Lock the Gate spokesperson Georgina Woods said projections showing a decline in contracts to ship coal exports after 2023 in the ARTC’s report were the latest in a serious list of indications that without government action, the economies of the Hunter Valley faced tough times as the world moved away from coal.

"The ARTC's capacity strategy shows a fork in the road for the Hunter region and NSW in the next five years,” she said.

“It's a turning point that we must prepare for, as the world responds to the climate crisis by reducing coal use.

"According to the mining companies' committed contracts, export volumes of Hunter and Namoi coal may begin to decline from 2023. If we take that road, the Hunter will need to undertake structural adjustment on a scale similar to the closure of the Australian car industry.

“The Hunter is not yet ready for economic disruption of that scale, and we urge politicians to take action to safeguard the region by encouraging industry diversification.

"Controversial coal mines like Watermark on the Liverpool Plains or the open cut mine proposed in the Bylong Valley are not yet locked in to contracts with the rail operator.

"We have nearly reached the fork in the road. If we choose to, we can protect water resources and food producing lands from further coal mining. We can invest the money ARTC is proposing to waste on hastening coal exports on instead creating new jobs that are not at risk of vanishing when demand for Hunter coal declines." 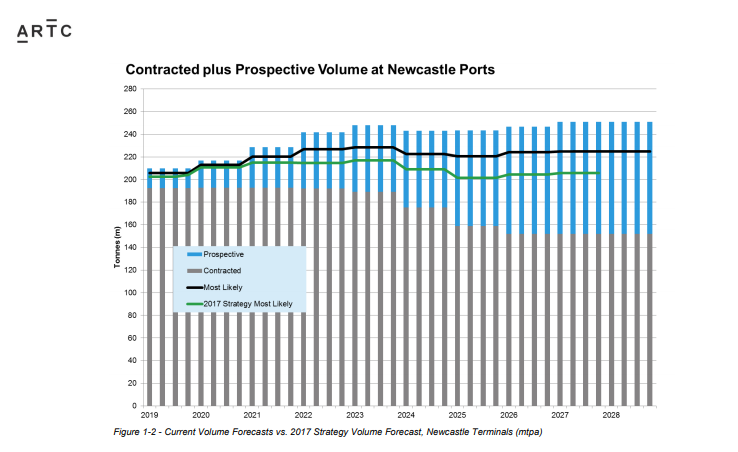