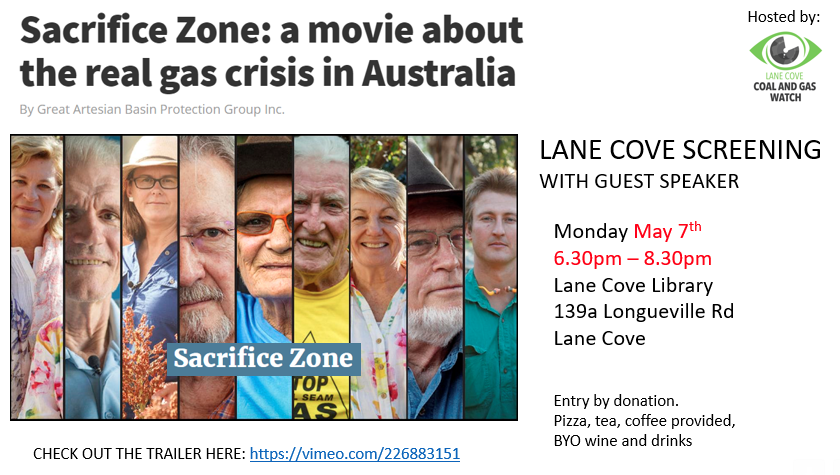 Join Lane Cove Coal and Gas Watch for a
special screening of a feature length documentary
plus Q&A with guest speaker.

COST: Free (entry is by donation)

The film will be followed by a Q&A.

NSW is facing its biggest threat right now from invasive gasfields. Betrayal by governments has left protectors fighting to save what they love. The Pilliga, Great Artesian Basin, Liverpool Plains – all are at risk. This is a David and Goliath battle to save our land, air and water. It’s also a fight for the soul and future of Australia. Hear from the experts and people living in the sacrifice zone and uncover the truth behind the real gas crisis confronting ordinary Australians.

What people are saying about this film:

Bill McKibben (350.org): 'Gas is a huge threat to the planet's climate, hence this film is a great help in the biggest battle the planet faces.'

Meg Nielsen (Bentley Gatekeepers): 'Tremendously inspiring to all farming communities around the world, to empower them and give them confidence to stand up.'

Luke O’Shea (multiple Golden Guitar winner): ‘Be inspired by these remarkable everyday people featured in this incredible documentary “Sacrifice Zone” and learn just how powerful YOU can be!’

Jack Mundey (legendary unionist and environmental activist): ‘Marvellous film. I couldn’t agree more with the action being taken to expose and fight against the undoubted damage to precious water resources if this mining is allowed to proceed.’

Shay Dougall (Human Rights Tribunal into Unconventional Gas): 'Magnificent. It is going to be a game-changer.'