Lock the Gate is calling for the EPA and the Department of Planning to act on long overdue recommendations to properly address and prevent cumulative impacts of open cut coal mining on air quality.

Data from Government air quality monitors shows 37 days when the average concentration of PM10 particulate pollution was above regulatory limits at five Hunter Valley locations in the last three months.

There has been a significant expansion of open cut coal mining in the region in the last five years and coal mining is known to be the largest source of PM10 pollution.

Lock the Gate Alliance spokesperson Georgina Woods said, “Despite a commitment five years ago to do so, NSW still doesn't have a cumulative impact assessment guideline for mining operations. This failure most affects the Hunter Valley, where there are a large number of open cut coal mines in close proximity.

“The people of the Hunter region are being badly let down by this Government. This poor air quality isn’t just ugly, it’s damaging people’s health and contributing to early death.

“None of the mines are being made accountable for air quality that is damaging people’s health because it’s a problem they’re all making together. We need a way to pause on new mine projects and expansion projects when the region is already at critical thresholds like this.

“Alarmingly, the Government still considering more open cut pits in the worst affected area, like the new super-pit United Wambo project, when they still haven’t set basic thresholds to protect people from cumulative health damage. There has to be a limit, and we’ve reached it.” 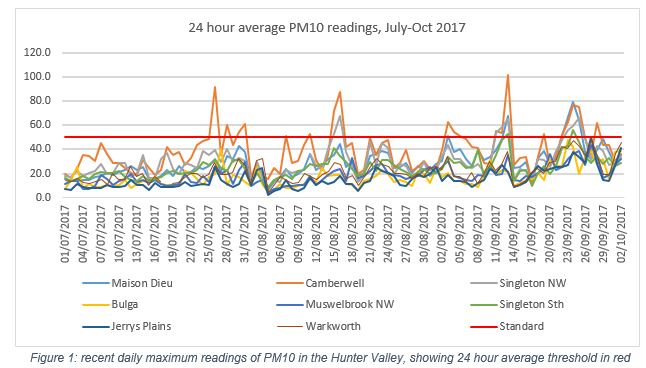