Two teams of scientists have concluded that longwall coal mining has damaged the Thirlmere Lakes, part of the Greater Blue Mountains World Heritage property, adding weight to calls for getting damaging coal mining out of Sydney’s drinking water catchment.

In an ABC news report, the Lakes system is described by the NSW National Parks and Wildlife Service as being “of international significance on the basis of its outstanding natural values.”

According to former mining consultant and co-author of one of the research papers, Dr Philip Pells, there “is a strong body of evidence now that the groundwater lost to the [Tahmoor] coal mine has impacted on the lakes." Dr Pells described the damage as severe, the overall impact of which means that the National Park of which they are a key feature, is “stuffed.”[i]

“We are seeking advice from the NSW Environmental Defenders’ Office to see if there have been breaches of law,” said David Hunt, from the Friends of Thirlmere Lakes.

Sue Higginson, CEO and Principal Solicitor for the NSW Environmental Defenders’ Office confirmed that the EDO is “looking at what legal options the community has to see the restoration of this important aspect of the World Heritage property and this includes, where there is evidence, holding those responsible to account”.

“This new research suggests that the operations of a longwall coal mine so close to the Lakes has been completely incompatible with Australia's obligations under the World Heritage Convention,” said Caroline Graham, Friends of Thirlmere Lakes.

“In addition to seeking legal advice, our group will be writing to UNESCO today, urging the UN body to use its muscle to encourage the Australian and NSW Governments to find water for the Lakes now, while a solution to the damage from longwall coal mining is found” said Hunt.

“Given that the protection of World Heritage is a responsibility of the Australian Government, which is currently in caretaker mode, we’re also writing today to Greg Hunt, Mark Butler and Larissa Waters asking for urgent help to fulfill Australia’s obligations to the international community to protect this place for future generations.”

“Tahmoor Colliery’s response to the two studies on the ABC report gave the impression that their mine is 13 Km from the Lakes whereas in fact the critical long wall panels mined just before the first lake began to empty were along the boundary of the National Park only 700m from the lakes” concluded Hunt.

The news comes hot on the heels of warnings from WaterNSW that longwall coal mining in Sydney’s drinking water catchment is threatening Sydney’s water supply. The agency has warned the NSW Department of Planning twice this year that two projects near Wollongong (Dendrobium and Russell Vale) – both inside a Special Area of the water catchment – are likely to result in “unacceptable” impacts if they proceed as planned.

As part of the federal election campaign, Lock the Gate is calling for ‘no go zones’ for coal and unconventional gas mining. 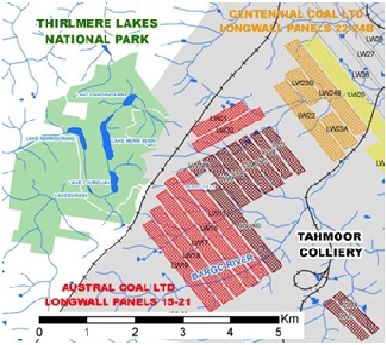 [iv] Pells and Pells, May 2016, ‘The water levels of Thirlmere Lakes – Where did the water go and when will it return?’