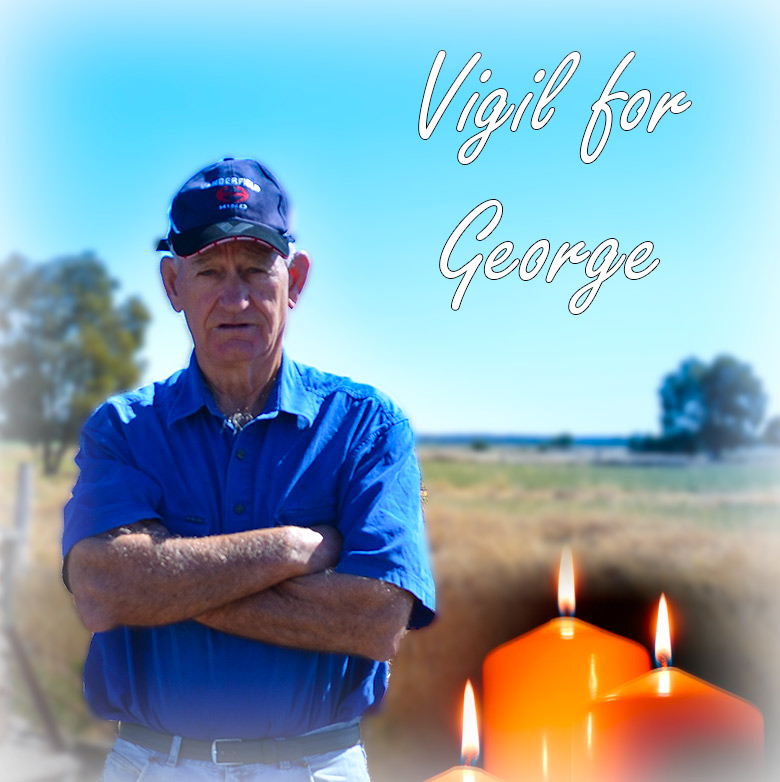 Cotton farmer George Bender died last week, after the pressure from CSG mining company Origin Energy to drill 18 gas wells on his property against his wishes overwhelmed him.

This week we will honour his memory at vigils being held in four major cities. You can stand in solidarity with George and the Qld farming community where he lived by:

JOIN US AT A MEMORIAL VIGIL

We will be holding memorial vigils across the country this week to pay our deepest respects to George and his family, to honor his memory, and to say, "never again".  Never again should a farmer be driven beyond despair by the heavy-handed tactics of CSG companies.

Alternatively, you can organise your own vigil on Thursday evening in your local community. We can add your local event to this list and share it on social media, if you email information and details to Elly at [email protected]

Please phone the Qld Premier now: (07) 3719 7000. Demand that she holds a crisis meeting with Lock the Gate Alliance and affected community members to identify actions that can be taken right now to ensure this terrible situation never happens again.

We have drafted an 8 point CSG Crisis Action Plan to relieve the pressure on farming communities in Qld and ensure that people are never again pushed past their breaking point by unfair laws and unscrupulous gas companies.

You can read the plan here.

That the Qld Government:

1. Amends the laws to prevent CSG companies using the threat of the Land Court to intimidate and coerce farmers, and instead provide landholders with a right to say no so that CSG companies are required to deal fairly if they want to obtain access.

2. Places an immediate halt on Origin Energy plans to drill CSG wells in the Hopeland area and creates a permanent no-go zone to protect this important floodplain area from CSG drilling in the future.

3. Urgently brokers buy-outs between gas companies and at least 5 families who are now at crisis point around Chinchilla, with the goal of having them moved to their satisfaction by the end of the year.

4. Establishes a CSG Family Crisis Panel which has a statutory role to broker exits for families who can no longer live with the stress of CSG mining, and which has a wide remit to intervene at a high level to resolve protracted difficulties for families.

5. Establishes and funds a Resources Ombudsman under statute, with all relevant powers granted to such office generally, to adjudicate in a formal manner on CSG related disputes, complaints and issues.

6. Establishes a dedicated counselling and support service for CSG Affected Communities, which is managed under the CSG Family Crisis Panel.

7. Immediately commences a study into the health impacts of CSG, funded to the tune of at least $500k, with an emphasis on mental health impacts and amelioration measures and which also includes ambient air quality monitoring program as recommended previously.

8. Establishes a CSG Health Roundtable, which is comprised of independent public health professionals with experience in environmental health, mental health and social impacts, to advise it on CSG impacts and to design and oversee the study referred to above.

The Premier has so far refused to meet with us, telling us she doesn't have time, despite the fact she spent the day after George Bender died visiting the Santos GLNG expert terminal in Gladstone.

Will you join us in telling her that this heartless response is totally unacceptable? Phone the Premier now: (07) 3719 7000.

George’s family have told us that George was fighting for all farmers, and that the best way to honor his memory is by fighting for the right of all landholders to say no to mining. In that spirit, please call the Premier today and demand change.

George was exceptionally brave and honest. A warm man and a wonderful farmer. He asked for nothing more than to quietly grow food and fibre for Australia. We are devastated to have lost him, and heartbroken for his family.

George had been fighting unconventional gas mining in his community for more than 10 years. Coal seam gas mining had already caused two of George’s bores to drop and Origin Energy were trying to force access to his property to drill 18 coal seam gas wells. They had threatened to take him to the Land Court.

He had also been forced to live with severe pollution from the Linc Energy underground coal gasification project that adjoined his property, which had impeded his regular farming operations and which threatened his livelihood.

You can hear George's story, in his own words, here.

Voices from the Gaslands - George's story from Lock the Gate Alliance on Vimeo.

If you or a member of your family are needing support, or information about suicide prevention, please contact Lifeline on 13 11 14.