The NSW government's approval of the Wallarah 2 Coal Project has been slammed by community groups, who say the decision shows that NSW mine approval laws are inadequate and need to be urgently overhauled.

The controversial project has been fought against by Wyong locals since 1996, and has been defeated twice by the local community. The project is subject to widespread opposition – including from the Member for Wyong, and the Central Coast Council – due to the risks it poses to the drinking water catchment for over 300,000 people.

“Wallarah 2 Coal Project is completely unacceptable and completely unwanted, and its approval is a slap in the face for local people who have been fighting it off for over 20 years”, said Alan Hayes, campaign director for Wyong group Australian Coal Alliance.

“The state government is more interested in appeasing the coal industry than in the welfare of the Central Coast community. It's sickening,” said Mr Hayes. “We will be exploring every option available to us to stop this project from going ahead, including court action,” he said.

Lock The Gate spokesperson Steve Phillips said the decision “shows just how desperately we need to fix the rules governing mine approvals in this state.”

“This is a risky, unwanted coal mine that threatens the safe drinking water supply for hundreds of thousands of people. The mine has been knocked back by a previous state government for those very reasons. How is it possible that the mine is now approved? The system is broken.”

“We call on the Berejiklian government to urgently fix up our state's broken mine approval laws, to protect water catchments and local communities from mining. Local people need the certainty that once a coal mine has been knocked back, it will stay knocked back for good.

“It's grossly unfair that local people are never entitled to rest easy that a mine project has been defeated for good, that it might be approved again at any time. It’s unfair that people cannot even take clean drinking water for granted.”

"The Coalition came to power promising to end mining in sensitive drinking water catchments. They promised to stop this very coal mine – Wallarah 2 – but now they’ve given it the green light.”

"It's time to choose drinking water over more coal mines. That's one of the key messages the people of this state will be sending from the #Time2Choose rally in Sydney on 24 March 2018 - exactly one year out from the NSW state election”, said Phillips.

“The Central Coast is both resilient and steadfast in its fight to protect the drinking water and community health from the draconian and unacceptable destructive impacts of a longwall coal mine,” said Alan Hayes.

“If Wallarah 2 believes that they have beaten us, they are mistaken. We will not go away.” 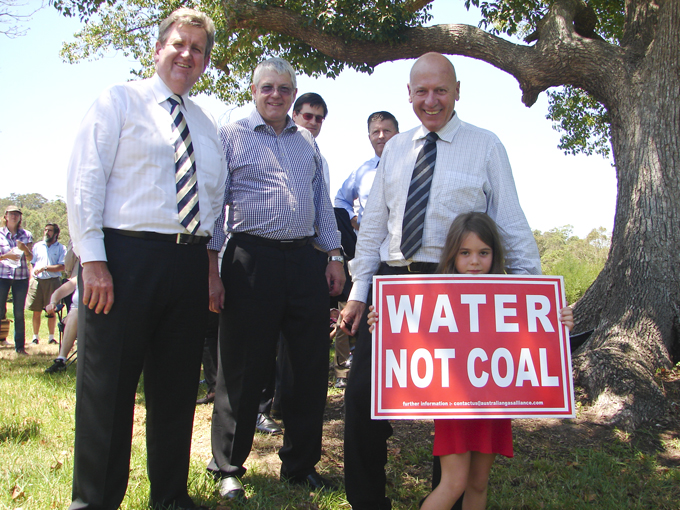